Real Mom Confessions: a mama update, the most epic meltdown ever, and lawnmower burps

Oh man. Do I ever have some goodies for this weeks edition. I don’t know if it’s because summer is upon us or because there’s been a full moon or maybe it’s the s’mores three nights in a row, but the kids are in some kind of rare form. So is their mama. 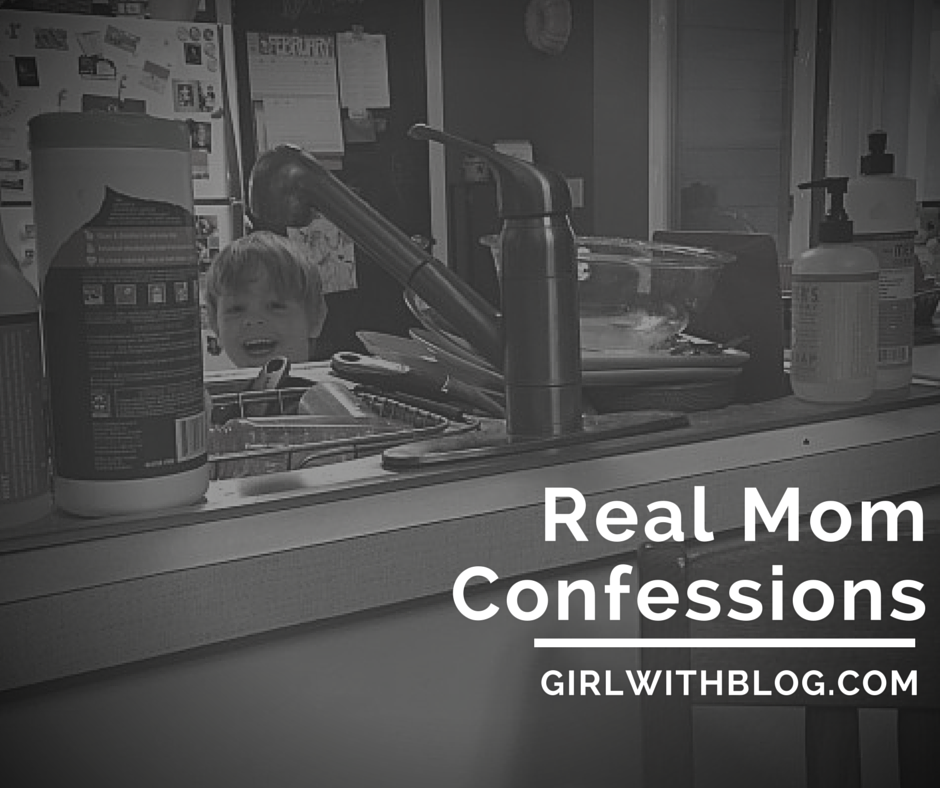 Part One: the mama
I don’t know, I just can’t seem to pull out of it! I crossed into 14 week territory with this tiny baby I’m growing, and the nausea seems to be thinking about starting to lift. I’ve been able to eat and drink more, which has been super helpful, and haven’t gotten any comments on how huge I am, which has been super nice. But even so… I just can’t seem to pull myself together. If I change out of my pajama pants it’s a swap for something I pull off the floor (nothing in my closet or dresser fits right now and I haven’t cleaned them out yet), I still prefer cereal to most other food, and my dry shampoo can is getting a better workout than I have in months.

Growing a person can really take it out of you.

1. Last week we had our last MOPS playdate of the year, meeting at a local park preserve to go on a hike. Sam was pretty cranky, and husby and I had been kind of snappy, so it wasn’t off to a great start but I held hope. It derailed pretty quickly during the hike, which was a ‘story hike’ – there were signs with each letter of the alphabet on them around the walk. So each kid with us had their picture taken by their letter sign – except my kid. This is the best one I could get of him while he whined in front of it. 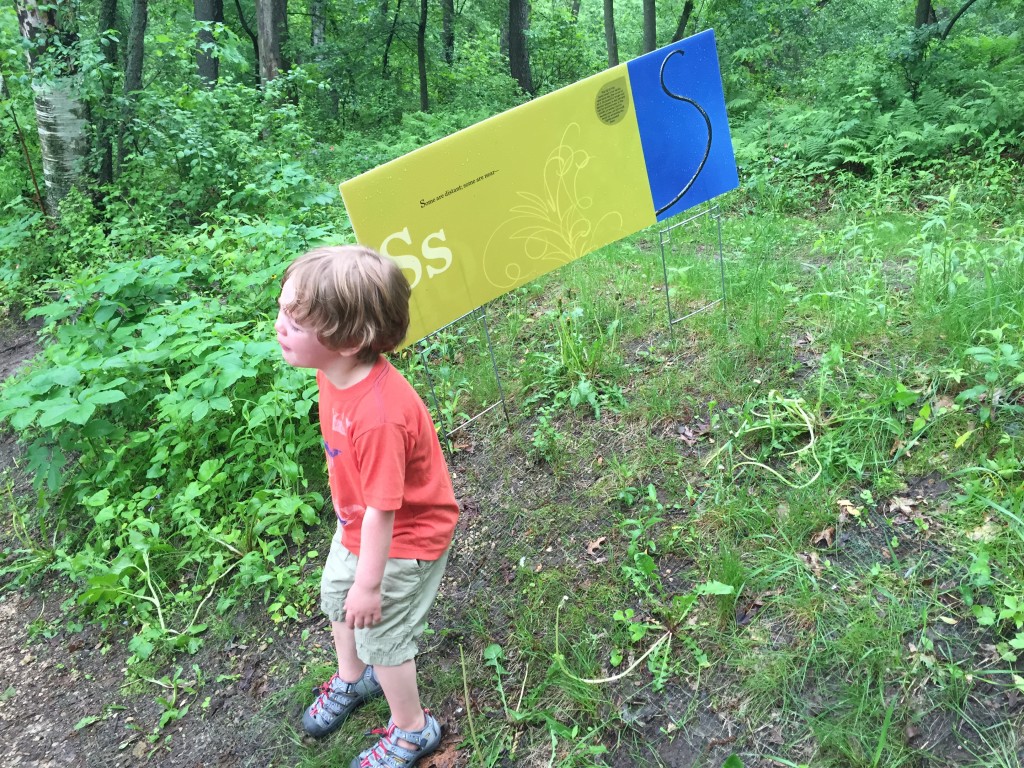 He whined and sulked through the whole walk, ran away from me, yelled ‘no!’ and then whined some more. He perked up when he got to pee in the woods. But then.

The walk ended at a small beach, and I’d let him go in the water in his clothes. I was fine with him getting wet – had new clothes in the car and I was prepared. But what I wasn’t prepared for was him, up to his waist in the water, telling me that he was ‘just going to go play with those’ and pointing to the BUOYS out in the middle. I had to go out in the water and drag him out, and it all culminated in the biggest, most epic meltdown to date, right there on the sidewalk. I’d said if he kept whining and disobeying we would leave, and now I had to follow through which stinks.

And I didn’t get to talk to my MOPS friends because their lovely children weren’t throwing themselves face first on the sidewalk, thrashing around. Just mine. Oy. There is another half to this story but it deserves a post of its own, so stay tuned.

2. The other day we had to wash Josie’s face and we weren’t sure what was food and what was bruises. That girl has recently been faceplanting into things like a boss.

3. We stayed out past bedtime twice last weekend, and Sam slept in his clothes. The same clothes. Twice. Because he wore them during the day, then to bed, then during the day, and then again to bed. Oh yes he did. 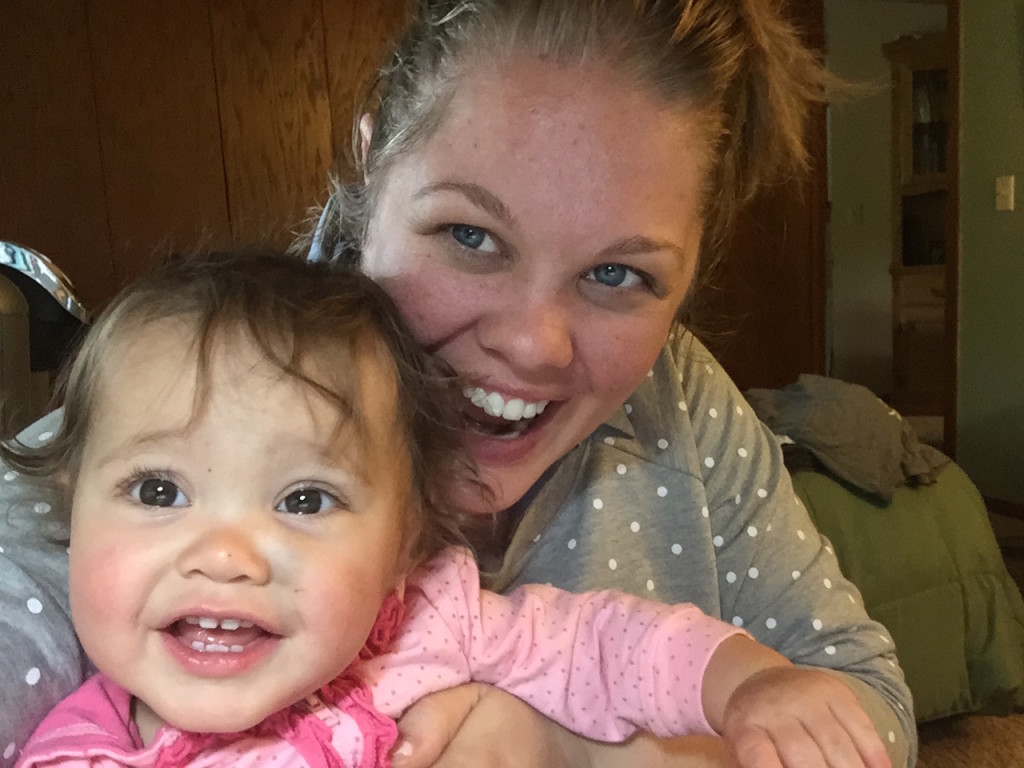 5. This is my favorite RMC of the batch. If you don’t know me offline, you may not know that I burp like a trucker. I don’t try to do it, they just come out and make my tummy feel so much better! My friends and family know this and embrace and giggle when it happens (I try to keep it quiet, but…) So we’re eating dinner together, and I burp. More than once. Not quietly. And my charming little boy pipes up and says, “Mommy, your burps sound like the lawnmower at the park!”

Husby and I just lose it, laughing so hard we cry right at the table. And Sam, who hadn’t meant to be facetious, was pleased as punch that he’d made his parents laugh so hard.

That’s it. Besides the legions of other tantrums, odd snack requests from the 3yo, and everpresent laundry in my living room. Your turn, mamas – whatcha got to confess this week?