17 weeks. Along we go! On our way to three babies. I think we’re still trying to wrap our minds around it all, and aside from hoping the sickness fades quickly, we are just so very excited we can’t stand it. I haven’t done any kind of update for you yet, and seeing as we’re all the way into the 2nd trimester, it’s time =)

A quick 1st trimester recap: sick and tired. Tired and sick. Sick some more. Sick all the time. Ate a lot of soup, saltines, and pbj’s, and drank orange juice, sierra mist and coke. Couldn’t stomach much of anything, not even water. Acquiesced to most cravings so that I could eat something that wouldn’t make me throw up. I took extra vitamin B6 and half a Unisom every night, which helped me sleep and wake up with less nausea. When the nausea started easing off I stopped taking the Unisom, a couple weeks ago now. It was a long few months and onto now at 17 weeks. Bring on the magical second trimester! Seriously. Anytime. Start being magical. 😉

Symptoms:
– Still nauseous. It’s worse in the evenings, so I’ve been trying to get to bed early. For a night owl, it’s a challenge but so worth it!
– Headaches. Again, they pick up in the evenings, so bed helps.
– Braxton Hicks contractions have begun, like clockwork for me. 16 weeks, either if I’m dehydrated or have anything in my bladder.
– Sleeping great. My sweet husby gets up with the babies if they wake in the night (cute how I said ‘if’, wasn’t it? Like they don’t wake up every night?) and I’m getting decent rest.

Cravings:
– Can’t get enough Mexican food, and want to throw salsa on everything.
– Italian food – pasta & pizza. If it’s carby and cheesy I want it.
– Not much else. Most food is just starting to not sound awful, so I’m happy with that =)

Aversions
– Chicken (again, same as my other pregnancies) and most meat, actually.
– Too sweet or too salty things are not my favorite.
– Still not a big fan of water. I’m trying to get it down but it’s hard. Ice helps, and so do Simply Lemon packets (I love the blackberry limeade and raspberry lemonade! No fake sugars or colors or any other gunk in them either.)

Weight Gain:
– 8 pounds. Right on track! So far seems to be all belly, and a little in my puffy hands. Had to stop wearing my wedding ring a couple weeks ago. Remember when I was pregnant with Sam and my hands swelled up so fast that the jeweler had to cut my ring off?! NOT happening again.

Movement:
– I’m definitely feeling baby flutters! No visible movement on the outside yet but it’s coming soon, I think. At our last doctor appointment the PA had to move the doppler around quite a bit to keep up with moving baby. And he/she gave a good kick to the mic, making a funny ‘thud’ noise that I found totally sweet =)

Doc Appts:
– Our big doctor and anatomy ultrasound happen in about a month! We’re still undecided if we’ll find out babys gender at that time, or wait (as we’ve done both times) until birth. We’ll see.

The Bump:
Want to see something fun? Here’s a side-by-side of me 16 weeks pregnant in 2011 with Sam, and four years and as many pregnancies later is me, 17 weeks pregnant with this baby: 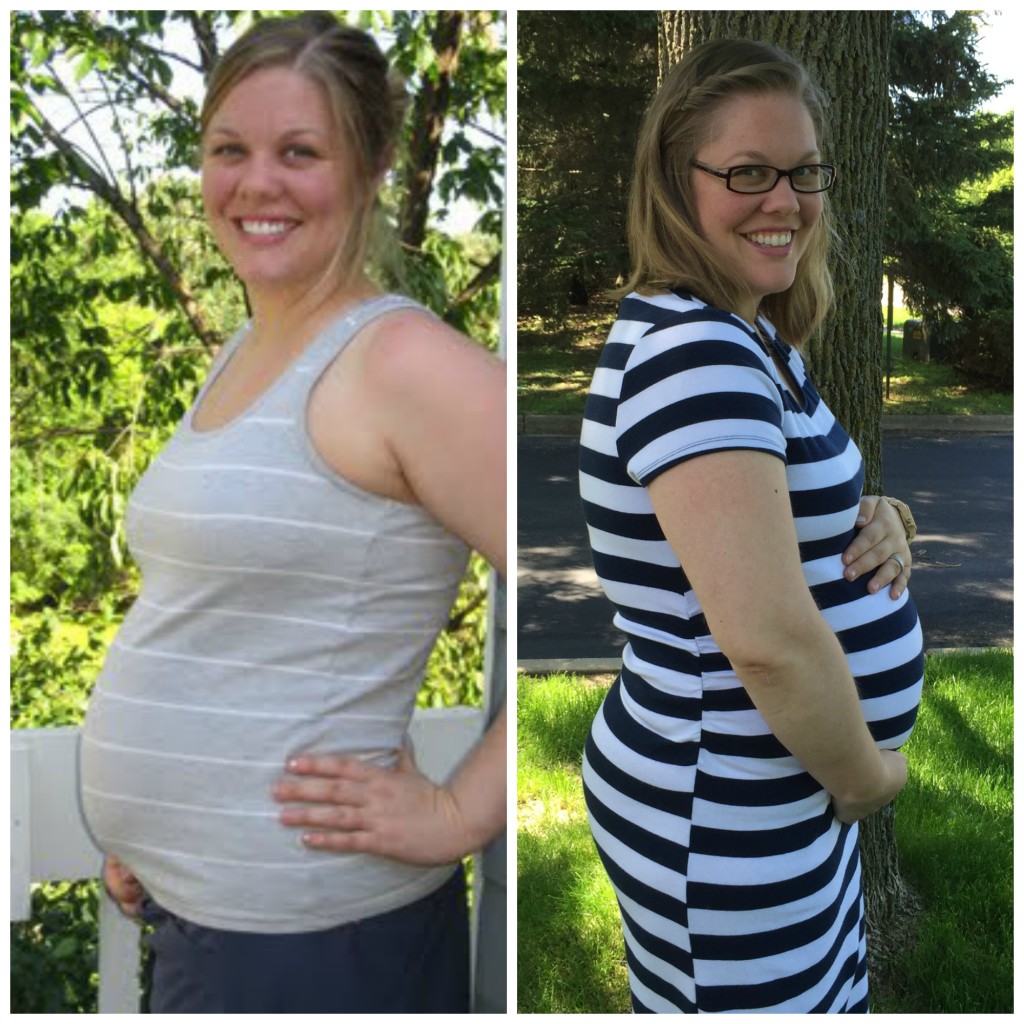 I no longer fit in those clothes. And boy, have phone cameras come a long way in four years 😉 There we go! Hoping to do another update after our next doc appointment. Thanks for your encouragement, prayers and checking in with me throughout the difficult first trimester. Hanging in there with gratitude.