I’ve known for months that Sam would be Olaf from Frozen for Halloween. He just adores that little snowman, and I thought I could find an Anna or Elsa dress for my Josie girl (which I did. And oh my. I can’t wait to show you trick-or-treating photos!) While I have absolutely zero problem buying a costume, I knew I would make this Olaf one for a single reason:

I am super weird about character costumes because invariably, all the features of the character’s face end up on the hood or hat of the costume, and it always looks – to me – like they’re eating the child’s face! I know. I’m a weirdo. But I can’t help but see them all in that light now! So make costumes I will. =)

If you need a quick and easy Olaf costume by Friday, this one is the way to go.  I based it off of this tutorial and it was a lifesaver! I flew in from the Allume conference on Sunday evening, and pulled this costume together after the kids were in bed. That’s how I roll. #parentsafterhours 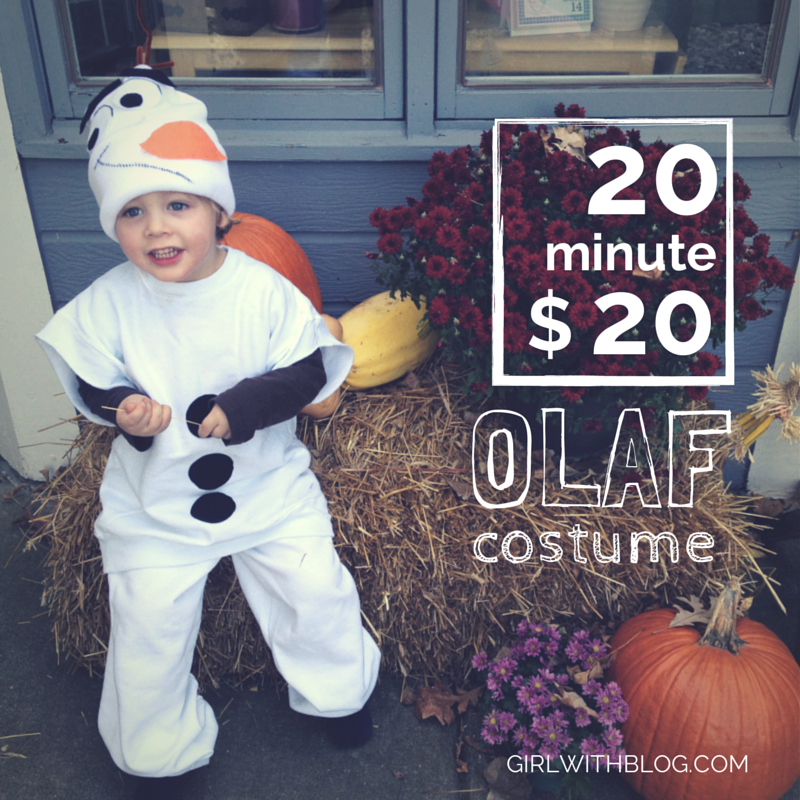 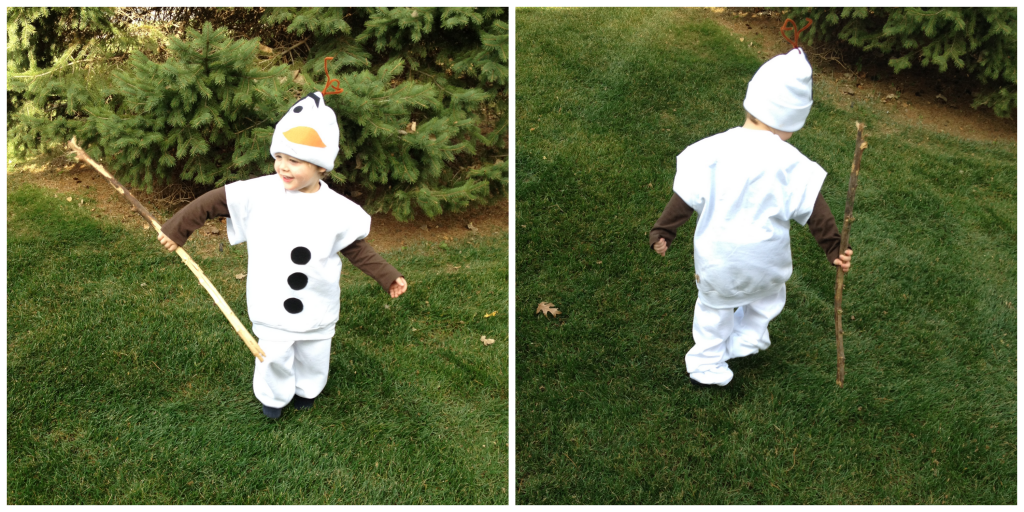 Cut out two large circles from the white felt. I took a black marker and outlined part of the top of each eye – this made a big difference in the overall look of Olaf’s face! Stick the eyes under the eyebrows, then stick a small black circle in the center of each.

Next, cut out the nose shape from the orange felt. My craft store didn’t have sticky orange felt, so I stitched the nose on with a needle and orange thread. I wish I would’ve centered it more (my thought in keeping it to the side was that it would look like it was sticking out, like the ‘real’ Olaf’s nose does) but it is so not a big deal. Orange carrot nose – boom. Count it. 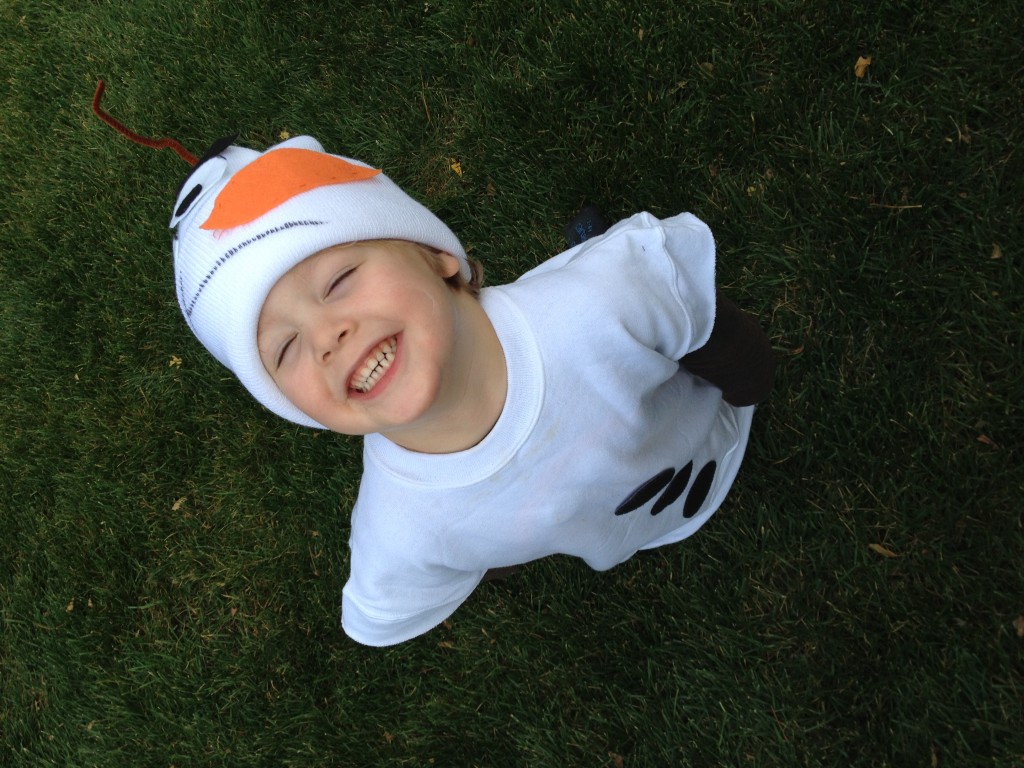 Finally, the ‘hair’. I cut a small hole on either side of the top seam in the stocking cap. Next, fold a brown pipe cleaner in half and stick an end through each of the small holes from inside the hat. Bring tops of pipe cleaners together and twist at the base, bending them apart after so they stick up in an Olaf-y way. I also cut another pipe cleaner in half, then twisted it around the base of the others, making three pieces of ‘hair’.

Cut the sleeves off the sweatshirt, and have your child wear a black or brown long-sleeve tee underneath for lifelike stick arms. =) And you’ll have your very own, warm hug-giving, sunshine loving, happy and homemade Olaf! 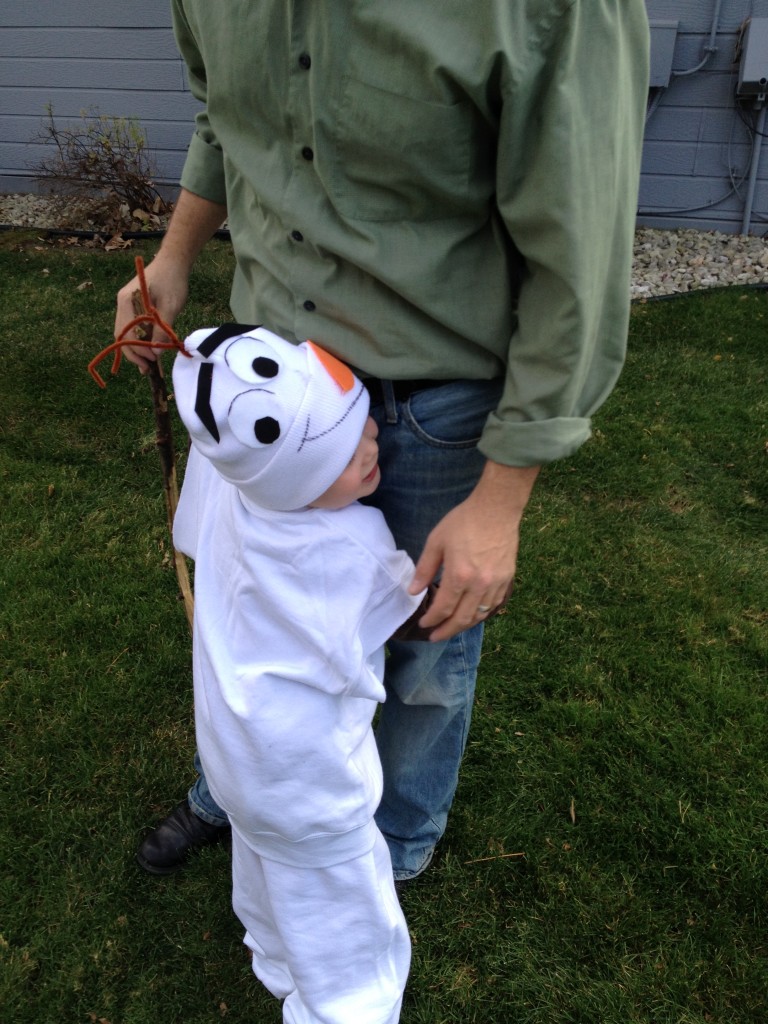 Tell me – what are your kids costumes going to be this year?